February 6, 2023 Virtual Zoom Meeting – Bulbophyllums: A Glimpse into the Largest Genus of Orchids

February 6, 2023 Virtual Zoom Meeting – Bulbophyllums: A Glimpse into the Largest Genus of Orchids

Our speaker will be our own Austin Miller! Austin is an active member of the Genesee Region Orchid Society and former tropical greenhouse manager of multiple nurseries, including Marlow Orchids, where he cultivated numerous orchid genera, aroids, and carnivorous plants. He has been growing orchids for just five years, but grows over 100 orchids in his personal collection in a 25 square foot grow space under LEDs.

Austin studied biotechnology at the State University of New York’s College of Environmental Science and Forestry, with his focus on horticulture and a special interest in tissue culture.

His talk, “Bulbophyllum: A Glimpse into the Largest Genus of Orchids”, will focus on the genus Bulbophyllum, its origins, and the culture of the plants. According to the American Orchid Society, “The genus Bulbophyllum was described by Louis-Marie Aubert Du Petit-Thouars in 1822, with the name coming from the Greek bulbos (bulb) and phyllon (leaf). Bulbophyllum and closely allied genera (especially Cirrhopetalum) are considered to be the largest group of orchids… (with) more than 2000 species in Bulbophyllum. Predominately tropical or subtropical, Bulbophyllum can also… range into temperate regions.”

The Zoom meeting will begin around 6:00 p.m., with our speaker scheduled to begin at 6:30 p.m. Members will receive an email with the link to the Zoom meeting, as usual. 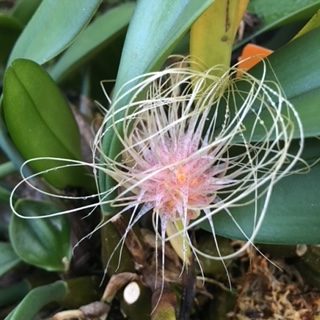 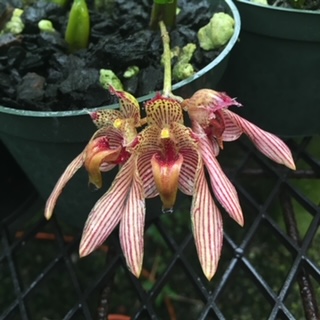 The Genesee Region Orchid Society (GROS) is a 501(c) non-profit organization based in Rochester, NY.

Our regular meeting night is the first Monday following the first Sunday of each month. We occasionally change the meeting date as our schedule requires, but we always list the correct date well in advance both on this website and in our monthly newsletter. Our meetings are open to everyone without charge – feel free to attend and find out what our Society is all about!

Meetings typically consist of a brief business meeting to conduct our club’s routine activities, a special presentation on an orchid subject, an orchid raffle (2 tickets for $1), and a Show Table where members can display their flowering plants for everyone to see. For more information, please contact any of our officers.

See our entire meeting schedule with all locations and maps here.

The dues for single membership are $20. Family membership dues are $25. You can download a membership application here.